Built in the nineteenth century, the Chalfonte offers "the view from yesterday" —genteel Southern-style hospitality, ornate gingerbread verandas lined with comfortable rocking chairs and a constant sea breeze to rejuvenate and refresh.

The Chalfonte’s distinctive ship-like profile, crowned by her Italianate cupola, now occupies nearly an entire city block. The hotel was built in 1876 by Civil War Colonel Henry Sawyer and was originally planned as a boarding house. Sawyer’s Chalfonte underwent most of its expansion between 1876 and 1909, and the present footprint is much as it was in 1909. This venerable grande dame by the sea still retains its Victorian charm—louvered doors to let the breeze through, Southern cuisine in The Magnolia Room, and original antiques and fixtures throughout.

President Lincoln and the Chalfonte

The history of the Chalfonte Hotel begins with a story that rivals Gone With the Wind. Sawyer arrived in Cape May in 1848 at the age of eighteen, a supporter of the Union side in the Civil War. He enlisted in a Pennsylvania regiment since a New Jersey one hadn't yet formed. After three months service and rising to the rank of captain, he returned home only to re-enlist in a New Jersey regiment. In June 1863, after being captured during a bloody exchange at the Battle of Brandy in Virginia, Sawyer was incarcerated at Libby Prison in Richmond.

In retaliation for the shooting of two Confederate Cavalry prisoners of war, the Confederacy proposed to execute two Union prisoners, drawn by lottery. Sawyer was one of the two selected in the lottery of death. When Sawyer’s wife heard news of her husband’s impending execution, she did not go into a state of mourning, instead rushing cross country to Washington to meet with President Lincoln and beg for his intervention. As a result, Secretary of War Stanton warned the South they would execute two Confederates if they executed the two Union prisoners. Upping the stakes, one of the Confederate prisoners selected was the son of General Robert E. Lee. The situation ended with Sawyer being released in a swap with Robert E. Lee’s son. He resumed active duty, and returned to Cape May in 1875 as a recognized war hero.

Having bought a parcel of land in 1872 at the corner of Howard Street and Sewell Avenue, in 1875, Sawyer began construction of "Sawyer’s Chalfonte." (Chalfonte means "cool fountain" in French; Sawyer’s reason for using the name is unknown.) In 1876 Colonel Sawyer bought all the rest of the square bounded by Columbia, Franklin, Sewell, and Howard except for the lot at the corner of Columbia and Howard.

Cape May’s inclination away from resort hotels in favor of the intimacy of cottages had already begun. This trend was sealed in the fall of 1878 when the city suffered yet another disastrous fire. Previous fires had seen the total destruction of the Mt. Vernon Hotel in 1858, and of more properties in 1869. While the fire of 1878 reduced Cape May's count of hotel rooms from 2200 to 200 in a single night, and marked the demise of large hotel construction in the rest of Cape May, the Chalfonte, standing unscathed beyond the fire’s reach, was about to experience an unprecedented expansion. 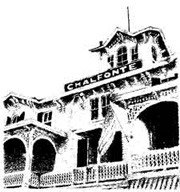 That same year Henry Sawyer extended his then two-year-old boarding house down Sewell Avenue, adding nineteen rooms to his existing eighteen. The original residence and addition were a significant improvement in architectural refinement over the pre-Civil-War hotels. While in no way extravagant, the building had a simple dignified Italian form (some-times known as "Cube Italian" in Cape May) with a balanced plan and facade.

In spite of suffering the ravages of time and storm, with minimal foundations, the first three phases of the building are soundly built with an eye to graceful resolution of any geometrical anomalies. Sawyer owned the hotel for another ten years, selling it in 1888 after just thirteen years of ownership. He died in 1893.

Between 1888 and 1911, the Chalfonte was extended to its current size, adding another twenty-three rooms along Sewell Avenue, enlarging the dining room, and providing delightful architectural riddles for future preservationists to solve.

The Hotel has had four owners: Henry Sawyer; the Satterfield family of Richmond, Virginia; and Anne LeDuc and Judy Bartella, who owned and operated the hotel for 30 years during which their efforts to preserve the building included partnership with the University of Maryland and the institution of work weekends. In the summer of 2008, the Chalfonte was purchased by Robert and Linda Mullock and family: Cynthia, Zack, Dillon, and Ellie.